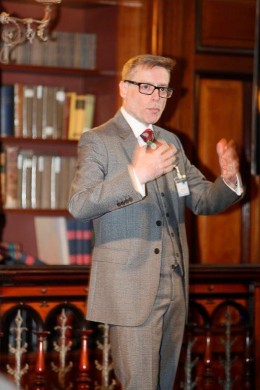 Mark Girolami is a Computational Statistician having ten years experience as a Chartered Engineer within IBM. In March 2019 he was elected to the Sir Kirby Laing Professorship of Civil Engineering (1965) within the Department of Engineering at the University of Cambridge where he also holds the Royal Academy of Engineering Research Chair in Data Centric Engineering. Girolami takes up the Sir Kirby Laing Chair upon the retirement and elevation to the House of Lords of Professor Lord Robert Mair. Prior to joining the University of Cambridge Professor Girolami held the Chair of Statistics in the Department of Mathematics at Imperial College London.

He was one of the original founding Executive Directors of the Alan Turing Institute the UK’s national institute for Data Science and Artificial Intelligence, after which he was appointed as Strategic Programme Director at Turing, where he established and continues to lead the Lloyd’s Register Foundation Programme on Data Centric Engineering.

In 2020 Professor Girolami will deliver the BCS and IET Turing Talk in London, Manchester, and Belfast.

Applications of Probabilistic, Stochastic and Statistical Modeling in the Engineering and Natural Sciences